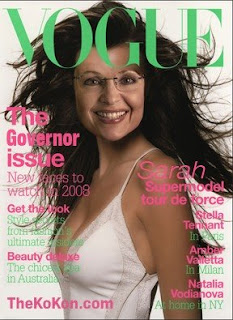 It's a horrible pun for a title, and even though I wince as I write it, I can't help but continue to be stultified at the Republican's choice for veep. Take a look at this op-ed in the NY Times if you want an interesting viewpoint about her and this whole mess. Better yet, head over to the MSNBC Countdown site and check out the segment called "Palin's Greatest Hits." If it gives you confidence in her, then you may as well stop reading right now.
We're at the point now where people are bitching back and forth, acting childish, pointing out minor flaws in each candidate, like, "Oh yeah, well he voted for this on one bill," and so on, where the point to discredit goes beyond logic. They say Obama doesn't have the experience. Well, the only people that really do have the experience for president are those who have already been president, right? Or any job seeker and their prospective job, for that matter. Take McCain's boast that he was suspending campaigning to go back to Washington and save everything. He didn't go directly, which tells you something about the man, but lost in the shuffle is that without him, there are still 90 something senators who could hammer out a proposal without him. Right?
I don't see McCain as bringing any hope to the White House, and while Obama might be an unknown, he could do no worse than the frat boy rodeo clown who held the job for the last 8 years. I say get Whitey out of the White House.
Posted by uncle wally at 10:08 AM