So today, the cell phone in my pocket rings. This is a big event, since few people know the number. And of course, it's a call from out of state, nothing I recognize. Probably a drug deal, who knows, but I answer it, because I'm bored. Some teenage voice asks if Katie is there, and I say, no man, sorry, wrong number. There a beat of dead air, and then I'm offered, well, since I have you on the line, do you know any good movies to take a girl to, like a good comedy? Poor sucker couldn't have reached a worse candidate to ask. Since I stay home with the kids, that's all I see are kid flicks, big animated adventures and all. So I tell him, sorry man, all I know is kid flicks. And because the technology of cell phones are so great, for a second, I know he thinks he hears chick flicks, and his voice comes alive. But I tell him, no, kid flicks, cartoons and stuff, and I don't know what movies are even playing right now. We part ways. Later, of course, I think to tell him to look at all the movie commercials he sees, and if one looks bogus or gay or whatever to him, that's the one to go to. Because it's not about what he likes, its about what she likes. But it's too late, and hopefully, he's with Katie at some movie, and they're sharing popcorn, and everything, at least for the moment, is okay.
Posted by uncle wally at 1:31 AM 1 comment:

The doc said the eyes are fine, just aging like a good wine, and making things close up hard to see. So reading glasses, or "cheaters" as he called them, are fine. What wasn't fine was the drive home - blinded by the available light, wearing two pairs of sunglasses, I inadvertantly, and slowly, by the way, went around a school bus at the top of the street. The mom was out talking with the driver, both in the driveway, no kids in sight. So I get hollered at, and when home, the phone call, with an over agitated neighbor saying she'd "blow me in, neighbor or not." I understand her point of view - what I did was wrong. But there's no way I can explain to her the current slew of medical problems, that the effect of penicillin on an empty stomach coupled with the disorientation of dilated pupils and the need to take a whiz in a hurry makes Homer do stupid things. It's too easy to say she's fucking nuts - which she is, given what I know of her, but in the end, she is, and if I really wanted to kill her kid yesterday, I would have driven the car across her driveway, through her garage, and into her family room, because that's where he probably was. Now leave me alone.
Posted by uncle wally at 8:04 AM No comments:

Today the tooth, tomorrow the eyes . . . 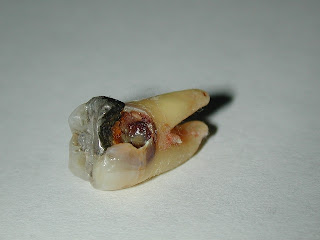 In the continuing path toward decomposition, I had a wisdom tooth pulled today. Number 17, if you're keeping score. I was disappointed, well, because, it took less time to pull the tooth than it takes to fart. Really. The dental surgeon said something like, "you might feel a little pressure," and then I did, and that was it. One more quick probe for something, some loose flap of skin or something, and game over. It took me considerably longer to get the prescription filled (where the consultation with the pharmacist consisted of her reading the labels to me), or to get home (a road was under construction and closed). So now I'm changing bloody little gauze pads every half-hour, and trying to keep two kids calm. They have the day off from school (Columbus must be the patron saint of superintendents), and hopefully the day will pass quickly. Tomorrow is the eye exam, the second stop on the tour.
Posted by uncle wally at 11:35 AM 2 comments: